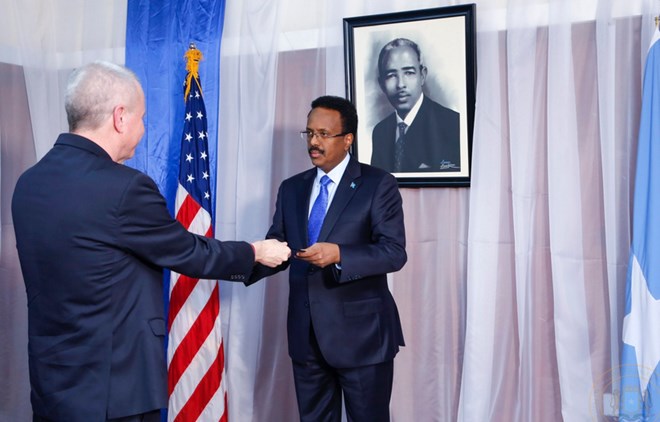 The new US Ambassador to Somalia, Larry André, presented his credentials to President Mohamed Abdullahi Farmaajo on Monday.

Mr André arrived in Mogadishu in January and had already begun working, including meeting officials in the federal government. He, however, could not speak publicly or make critical comments as his credentials were yet to be officially received by the Somali head of state.

In a ceremony at Villa Somalia, the presidential palace in the capital Mogadishu, the new envoy formally presented his credentials, then shared a message from the President of the United States Joe Biden with the Somali leader.

Mr André pledged his commitment to strengthening ties and cooperation between the two nations.

The envoy comes in at a time when the country is struggling to complete the much-delayed parliamentary elections.

Somalia was supposed to vote in MPs from November 2020 and conduct presidential polls by February 8 last year. The country is now gearing up to conclude the election of legislators by the February 25 deadline. The MPs will then elect the next president.

According to message circulated by Villa Somalia’s communications directorate, President Farmaajo told the ambassador about his government’s willingness to closely collaborate with the US on all important spheres that interests both countries.

“I can assure you that the Government of Somalia will be working with you on strengthening diplomatic relations between the two countries, in particular by promoting economic cooperation, security, counter-terrorism and humanitarian issues,” the President said.

Mr André replaces Donald Yamamoto who served in the capacity for the past 4 years, including the time when Donald Trump, the then US president, banned Somalis from going to the US to tame terror threats. It was a controversial policy, which was late overturned.

On Monday, Farmaajo pledged to stick by the country’s commitment to improve security, reform the armed forces, reform the financial sector and intensify the war on corruption.