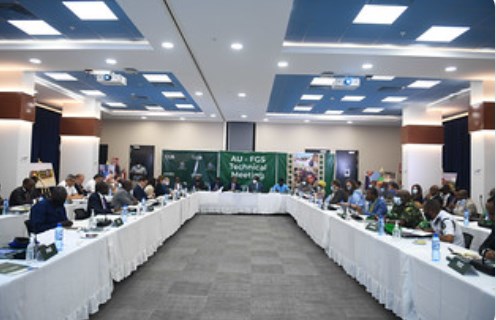 MOGADISHU (HOL) – The African Union, the Federal Government of Somalia (FGS) and international partners are meeting in Mogadishu today to deliberate on plans to replace AMISOM following its expected end of mandate at the end of this year.

The meeting is a follow up to an earlier meeting between the Somali and AU technical teams last month which proposed a transitional military force succeeds AMISOM for a period of two years.

The AU Transitional Mission in Somalia (ATMIS) which takes a similar form and shape as AMISOM will take over at the end of this year to prepare ground for a hand over of security responsibilities to Somali Security Forces, the two sides said in a joint statement in January 22.

STP is a comprehensive strategy developed by FGS and its partners to guide the gradual transfer of responsibility for security in Somalia to the Somali security forces.

“As suggested by the technical teams of the FGS and the AU, the mandate of the new African Union Mission in Somalia will be to support the Federal Government in fulfilling its strategic and priority objectives of the STP,” the defense minister said.  .

The Deputy Special Representative of the United Nations Secretary-General, Anita Kiki Gbeho, stated that the UN is committed to the successful reform of AMISOM through consultation, co-operation and coordination.

“Somalia’s transition plan focuses on achieving comprehensive security change in Somalia, and the United Nations is committed to supporting this Somali-led process. I want to underline that reform  of AMISOM’s new mission is an important part of this effort, ”said Gbeho.

AMISOM has  been operating in Somalia since 2007.