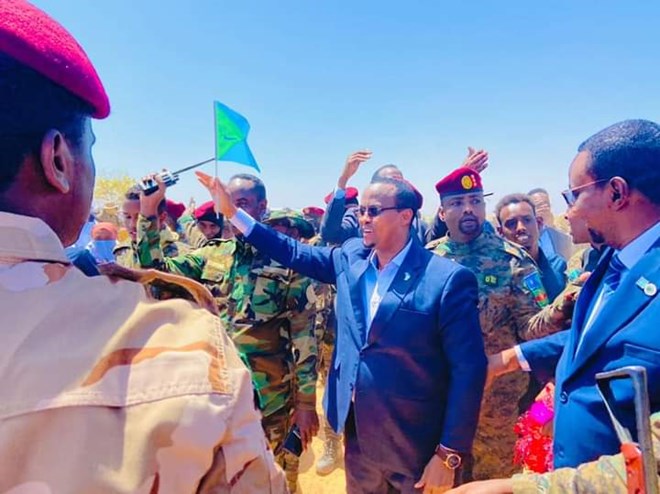 MOGADISHU (HOL) – Hir-Shabelle State president Ali Gudlawe arrived in Beletweyne Sunday over a year since he was elected amid sharp opposition from Hiiraan region which has severally rejected his presidency.

Sources in the town said Gudlawe is expected to meet leaders from the region after safely arriving in the city. Earlier, there were fears the Hiiraan Revolutionary Council, a rebel force which has the backing of some leaders in the region would clash with government forces protecting Gudlawe.

Government forces were deployed at Ugaas Khalif Airport where the Hirshabelle leader landed all through to the centre of the town where he drove to.

Mortar shells were fired near the airport early Sunday before Gudlawe’s arrival but there were no reported casualties.

Gudlawe was elected in November 20, 2020 but has not stepped Hiiraan region until today after clans there opposed his elections noting it violated a rotational agreement between Hiiraan and Middle Shabelle regions.

His arrival today follows the deployment of Gorgor and Haram’ad military units by Villa Somalia last week in Beletweyne. Prime Minister Mohamed Roble opposed the deployment and ordered the withdrawal of the forces to no avail.

Sources said the arrival of Gudlawe in Beletweyne marks a major step for Villa Somalia’s efforts in influencing the upcoming Lower House elections in the region. Out of the 38 seats allocated to HirShabelle, 25 will be be up for election in Beletweyne.